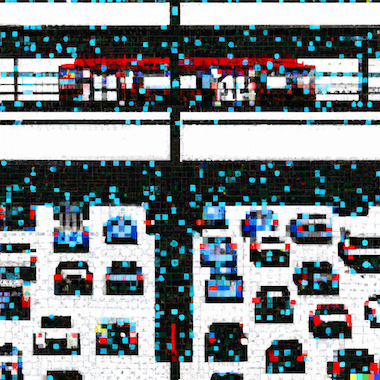 This research makes use of a high-dimensional neighbourhood-scale database to estimate the pollution mitigating impacts of urban public transportation infrastructure. Short and long-run localized pollution reductions are estimated and attributed to the expansion of the underground metro system of Lisbon, Portugal, and the introduction of a targeted low emission zone in the city centre.

Geostatistical methods are used to process high-frequency and high-resolution open source pollution measures to generate a longitudinal neighbourhood level monthly pollution database spanning since 2000. A large focus compares how fixed-point measures can be interpolated and aggregated across space and time by evaluating robust diagnostics of Kriging and Inverse Distance Weight interpolations. Generalized sets of diagnostics and algorithms are used to select the best, most consistent, model for each of six pollutants.

Long-run effects are estimated under a spatial-temporal difference-in-difference strategy to obtain the average treatment effect of a transit intervention on neighbourhoods in key areas of the city. Results indicate that the expansion of new metro stations have resulted in a decrease in pollution primarily in the city centre and in locations around the newly opened metro stations. Short run localized reductions of PM10 immediately following the opening of a metro range up to 2% with longer run reductions of 0.18%. Metro openings had a particularly large impact on decreasing nitrogen-based combustion emission along the riverfront with short-run reductions of 20%, dissipating over time and space.

The LEZ by comparison decreased pollution in and around its boundary and expanded into the city centre with immediate reductions in the subsequent months by up to 4% of PM10 and long-run impacts of 0.43%. Some evidence suggests however that the introduction of the LEZ may have shifted pollution patterns elsewhere with increases just outside the boundary and along the Tagus river. The LEZ zone in particular had significant reduction impacts on SO2 concentration where metro openings did not, capturing the policy’s aim of reducing the heaviest polluting vehicles, often running on diesel fuel.